THE STATUE OF LIBERTY 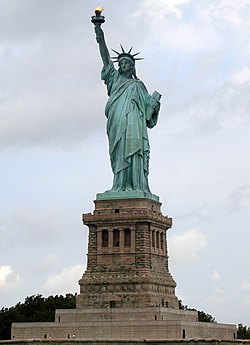 According to the National Park Service, the idea of a monument presented by the French people to the United States was first proposed by Édouard René de Laboulaye, president of the French Anti-Slavery Society and a prominent and important political thinker of his time. The project is traced to a mid-1865 conversation between Laboulaye, a staunch abolitionist, and Frédéric Bartholdi, a sculptor. In after-dinner conversation at his home near Versailles, Laboulaye, an ardent supporter of the Union in the American Civil War, is supposed to have said: "If a monument should rise in the United States, as a memorial to their independence, I should think it only natural if it were built by united effort—a common work of both our nations."[8] The National Park Service, in a 2000 report, however, deemed this a legend traced to an 1885 fundraising pamphlet, and that the statue was most likely conceived in 1870.[9] In another essay on their website, the Park Service suggested that Laboulaye was minded to honor the Union victory and its consequences, "With the abolition of slavery and the Union's victory in the Civil War in 1865, Laboulaye's wishes of freedom and democracy were turning into a reality in the United States. In order to honor these achievements, Laboulaye proposed that a gift be built for the United States on behalf of France. Laboulaye hoped that by calling attention to the recent achievements of the United States, the French people would be inspired to call for their own democracy in the face of a repressive monarchy."[10] 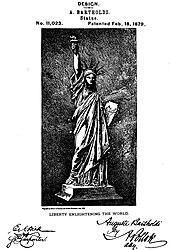 According to sculptor Frédéric Auguste Bartholdi, who later recounted the story, Laboulaye's alleged comment was not intended as a proposal, but it inspired Bartholdi.[8]Given the repressive nature of the regime of Napoleon III, Bartholdi took no immediate action on the idea except to discuss it with Laboulaye. Bartholdi was in any event busy with other possible projects; in the late 1860s, he approached Isma'il Pasha, Khedive of Egypt, with a plan to build Progress or Egypt Carrying the Light to Asia,[11] a huge lighthouse in the form of an ancient Egyptian female fellah or peasant, robed and holding a torch aloft, at the northern entrance to the Suez Canal in Port Said. Sketches and models were made of the proposed work, though it was never erected. There was a classical precedent for the Suez proposal, the Colossus of Rhodes: an ancient bronzestatue of the Greek god of the sun, Helios. This statue is believed to have been over 100 feet (30 m) high, and it similarly stood at a harbor entrance and carried a light to guide ships.[12] Both the khedive and Lesseps declined the proposed statue from Bartholdi, citing the expensive cost.[13] The Port Said Lighthouse was built instead, by François Coignet in 1869. 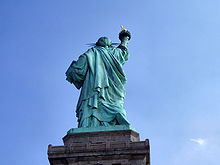 The Statue of Liberty from behind, showing that she is walking forward

Any large project was further delayed by the Franco-Prussian War, in which Bartholdi served as a major of militia. In the war, Napoleon III was captured and deposed. Bartholdi's home province of Alsace was lost to the Prussians, and a more liberal republic was installed in France.[8] As Bartholdi had been planning a trip to the United States, he and Laboulaye decided the time was right to discuss the idea with influential Americans.[14] In June 1871, Bartholdi crossed the Atlantic, with letters of introduction signed by Laboulaye.[15]

Arriving at New York Harbor, Bartholdi focused on Bedloe's Island (now named Liberty Island) as a site for the statue, struck by the fact that vessels arriving in New York had to sail past it. He was delighted to learn that the island was owned by the United States government—it had been ceded by the New York State Legislature in 1800 for harbor defense. It was thus, as he put it in a letter to Laboulaye: "land common to all the states."[16] As well as meeting many influential New Yorkers, Bartholdi visited President Ulysses S. Grant, who assured him that it would not be difficult to obtain the site for the statue.[17] Bartholdi crossed the United States twice by rail, and met many Americans who he thought would be sympathetic to the project.[15] But he remained concerned that popular opinion on both sides of the Atlantic was insufficiently supportive of the proposal, and he and Laboulaye decided to wait before mounting a public campaign.[18]

Bartholdi had made a first model of his concept in 1870.[19] The son of a friend of Bartholdi's, U.S. artist John LaFarge, later maintained that Bartholdi made the first sketches for the statue during his U.S. visit at La Farge's Rhode Island studio. Bartholdi continued to develop the concept following his return to France.[19] He also worked on a number of sculptures designed to bolster French patriotism after the defeat by the Prussians. One of these was the Lion of Belfort, a monumental sculpture carved in sandstone below the fortress of Belfort, which during the war had resisted a Prussian siege for over three months. The defiant lion, 73 feet (22 m) long and half that in height, displays an emotional quality characteristic of Romanticism, which Bartholdi would later bring to the Statue of Liberty.[20]